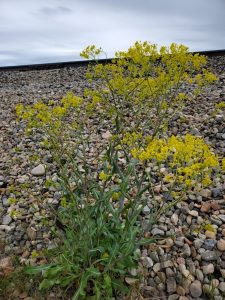 Early Detection, Rapid Response is imperative to the control success of Dyer’s woad in Montana. Dyer’s woad was first identified in Montana in 1934, and since then it has been found in 22 counties. The Montana Dyer’s Woad Cooperative Project began in 1984 as a formal entity known as the Montana Dyer’s Woad Task Force. This group is governed by a board, providing clear lines of communication and the authority necessary for others to take action, with Beaverhead County Coordinator, Amber Burch, leading the effort. The Task Force has set and communicated a common state-wide goal of eradicating Dyer’s woad from Montana by conducting the following efforts:

Since the development of the Montana Dyer’s Woad Cooperative Project, the species has been eradicated from 11 of the 22 counties. As of 2020, Dyer’s woad is found in Beaverhead, Missoula, Park, Flathead, Sweetgrass, Stillwater, Jefferson, Powell, Butte-Silver Bow, Treasure, and Lewis and Clark Counties. Per the Dyer’s Woad Task Force Management Plan an infestation is considered to be eradicated if no plants have been found in the site for 8 consecutive years, or if only 1 non-seed producing plant was found and removed from the site and no additional plants have been present since. 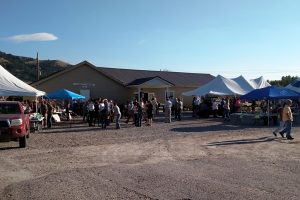 The Big Hole Watershed is a diverse landscape, hosting a Blue Ribbon trout stream, the Big Hole River, ranching communities, ample public lands for recreation, wildlife habitat, and scenic views for miles! Noxious weed species can negatively impact the watershed, and the variety of wildlife and activities occurring there can be a significant vector for weeds. In 2004, the Weed Whacker’s Ball, an annual fundraiser, was formed as a part of the Big Hole Cooperative Weed Management Area (CWMA). The goal of the Weed Whacker’s Ball is to raise money to manage noxious weeds along the Big Hole River and within the watershed. The event is supported by the local community and partners and is comprised of a silent and live auction of donated items, a banquet, and live entertainment. The Weed District also brings in an education trailer and staff that can assist and educate those in attendance. Proceeds from the fundraiser is dedicated to continuing education and a landowner cost-share program within the Big Hole for annual weed management. The fundraiser will be held on September 11, 2021 in Wise River, MT. Come join us and support weed management in the Big Hole! 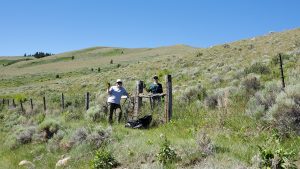 Volunteers that participated in a houndstongue seed head pull in the Upper Blacktail.

In 2020, the Weed District entered into the WHIP grant program with the Blacktail Weed Management Cooperative Project (BWMCP), which focuses on three priority wildlife habitats: The Brown, Cottonwood, and Upper Blacktail. The project will focus on invasive weed management, specifically with houndstongue, spotted knapweed, and Canada thistle, which will allow the native vegetation to flourish.

The BWMCP borders the Upper Ruby Cooperative Management Area, which applied and received funding from WHIP in 2018, and the Centennial Valley Weed Management Cooperative Project, which applied and received funding from WHIP in 2019. The BWMCP is a part of collaborative WHIP efforts across a large landscape that migratory populations of wildlife utilize. Wildlife do not see land management boundaries, and the Blacktail, Upper Ruby, and Centennial Valley WHIP projects enhances treatments and maximize treatment dollars in a broader landscape, impacting a combined 1.04 million acres! 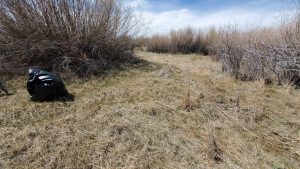 The Poindexter Slough is a very large FWP fishing access in Dillon, MT. It provides habitat for various fish species, deer, moose, wetland bird species, and game bird species, such as pheasants. However, Poindexter has a significant noxious weed problem with houndstongue and Canada thistle. The Weed District, in partnership with the Beaverhead Conservation District and Beaverhead Watershed Committee, Montana FWP, and Montana Youth Challenge, recruit volunteers in the spring and fall to conduct houndstongue seed head pulls. Houndstongue produces a seed, which resembles and acts like a burr, which sticks to clothing, fur, shoes, and even vehicles, allowing it to spread far and wide. Herbicide applications to not effect the viability of the seeds. Because of this, mechanical control (hand-pulling) of houndstongue seed heads reduces the number of seeds that can be spread around Poindexter and the landscape, ultimately preventing the spread! With many hands, volunteers have removed hundreds of large black bags filled with houndstongue seed heads!

Canada thistle is tougher to control and grows along the streambank. Because of its prickly stem and leaves, as well as its rhizomatous root system, mechanical control of Canada thistle is uncomfortable and not as effective. In partnership with the Montana Biological Weed Control Coordination Project and Madison Valley Ranchlands Group, the Weed District has placed Canada thistle rust biocontrol at Poindexter to test an alternative method to control the spread!

The Beaverhead County Weed Day focuses on weed management across the entire county! Community volunteers, landowners, local, state and agency partners, and 4-H students meet at the Beaverhead County High School parking lot to get a refresher on local weed ID, get their location assignments, and presented the “scavenger hunt” list to win prizes at the end of the day! Groups focus on chemical and mechanical treatments in the following locations:

After a day of noxious weed management, the volunteers, landowners, partners, and 4-H students are treated to a BBQ! The individuals that participate in the scavenger hunt present their findings and the winners awarded fabulous prizes. It is a fun day of weed management and education for the folks of Beaverhead County. Join us July 10, 2021 to be a part of the Beaverhead County Weed Day! 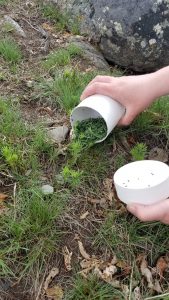 A Weed District crew member is releasing weevils that will target a yellow toadflax infestation.

The Weed District works with the Montana Biological Weed Control Coordination Project to collect, distribute, and monitor various biological controls on public and private lands. The Weed District and landowners have utilized biocontrols for spotted knapweed, musk thistle, Canada thistle, leafy spurge, Dalmatian toadflax, and yellow toadflax infestations. Biocontrol can be a slow process, requiring 10-20 years to be effective, so its purpose is to reduce infestation densities and rate of spread to acceptable levels while land managers and landowners manage the infestations utilizing other tools.

Education and awareness programs develop public understanding of the threats that invasive, exotic plants pose to natural resources. Continuing education programs that focus on weed identification, resource threats, new techniques, and proper management of available methods are critical to sustainable efforts against the spread of noxious weeds. Both awareness and education provide an important first step in the detection of new invaders.

The Weed District hosts a variety of education and awareness programs for both school-aged children and adults. School programming includes 5th, 6th, and 7th grade classes from Dillon Elementary and Middle School and a Summer Nature Program with Lima School and the Centennial Valley Association. These programs are designed to engage students with weed ID, mechanical treatment techniques, and encourage them to be future stewards of their home. 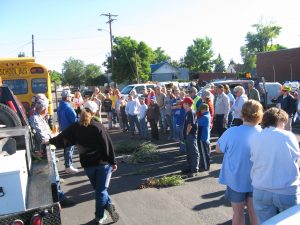 We offer continuing education credits toward applicator licenses throughout the year. Landowners, commercial applicators, and partners can attend these trainings to receive applicator credits that will allow them to retain their licenses. Topics have included: weed ID, pollinators, integrated weed management strategies, biological controls, water quality, soil health, and revegetation.